Dr. Lilliana Corredor- on behalf of Scientists for the Mekong © 1 Feb. 2016

During a Community Meeting we conducted in the Cambodian township of Preah Rumkel, locals reported Fish Kills during the month of January (fish up to 30 Kg were found dead floating in the river). As well as, increasingly poor water quality.

Locals stated that before the upstream dams were built they could safely drink the Mekong River water. However, since construction started on the Xayaburi Dam the water quality deteriorated significantly. They claim this is now even worse with the Don Sahong Dam being built less than 2 Km from this town. They reported a high incidence of coughing, vomiting and diarrhoea, both in adults and children in the past 2 years, which has forced them to boil the water before drinking it and even before cooking with it.

We believe this is the result of upstream Hydropower Dams in Laos (Xayaburi & Don Sahong Dams) and probably upstream point sources of pollution, such as: mining, agro-chemicals runoff and sewage from Laos/Thailand/Myanmar. 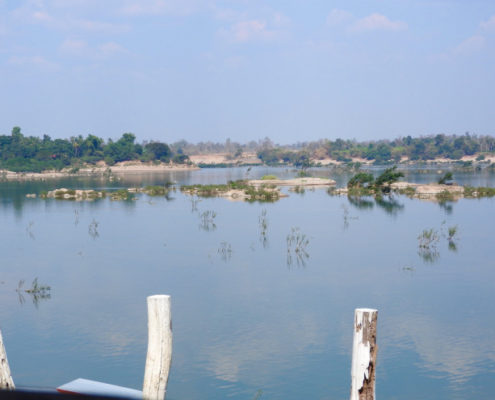 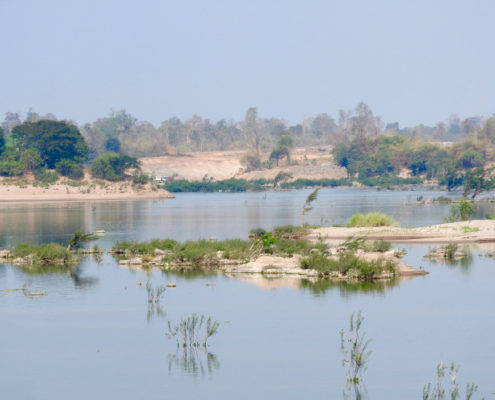 We can attest to the low water quality of the Mekong River at present. We found dead fish floating in polluted water in the area between the Don Sahong Dam & Preah Rumkel. 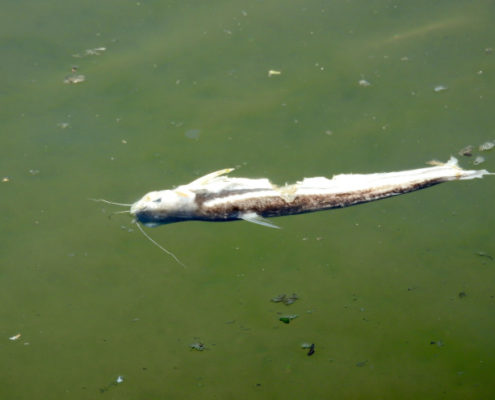 We also found putrid water at the nearby Preah NiMitt Falls – also called Sopheak Mitt Falls in Laos, located 8Km west of Preah Rumkel. The water stinks so badly it left our clothes impregnated with a foetid smell, which did not come off after one washing, needing 2 washes to dispose of the stench… See green slime in photos below. 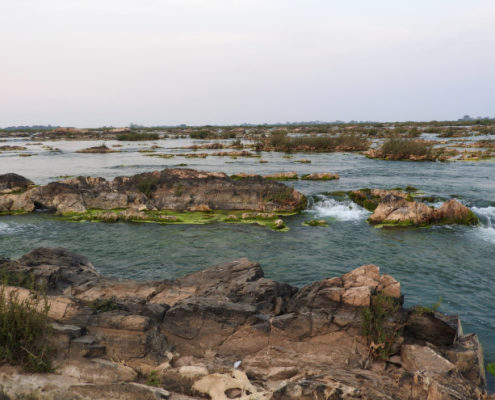 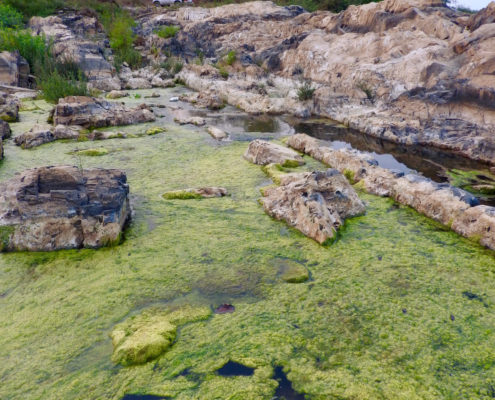 Notice green slime covering putrid water. The stench was a shock to us.

The present state of water pollution of the Mekong River on the border between Laos & Cambodia is a serious cause of concern. Thousands of poor people in the north Cambodian communities of Preah Rumkel, O’Svay, the Mekong islands and Ramsar Wetlands live and depend on the Mekong River as their only source of water for drinking, cooking, fishing and daily chores.

On 2 Feb. 2016 we spoke to Mr. Kosal, representative of the NGO ‘WorldFish’ who was giving a workshop with local fishermen in the town of O’Svay. He revealed to us his concern regarding the Mekong’s low water quality and the impacts of Dams upstream on local poor populations in Cambodia and on fisheries.

In O’Svay we were unable to swim in the Mekong River, because of similar foetid and slimy water to that seen in Preah NiMitt Falls.

Hence, it is not surprising that fish kills are occurring. This situation is getting worse by the construction of the Don Sahong Dam across from Preah Rumkel and only a few kilometres to the west of the Ramsar township of O’Svay.

See photo below of the Don Sahong Dam construction site on 1 Feb. 2016

Given that the Don Sahong Dam is being built on a Geological Fault Line – it is highly likely that this dam may eventually break in a major flood event coupled with a tremor.

It is incomprehensible that the Laotian & Cambodian Governments have shown such disregard for the security of over 1,000 families living in Preah Rumkel, less than 2 Km. from the Don Sahong Dam site. If such a disaster occurs, it would be tantamount to eco-genocide!

Moreover, thousands more people who live a few kilometres to the east of Preah Rumkel in the town of O’Svay will also be severely affected by a dam breakage. Yet neither the Laotian nor the Cambodian governments have taken into consideration the safety of such a large amount of people!

According to the Final Report of the Mekong Delta Study – Impact Assessment Report (MDS_IAR -see another of our blogs) released in January 2016, the breakage of the Sambor Dam would generate a tsunami-like flood-wave 8.5 meters high, which would impact on the town of Kratie located 35 km downstream.

If the Don Sahong Dam breaks the tsunami-like flood-wave will be very high particularly as this event will most likely take place during a big flood. Such a flood-wave occurrence will certainly wipe out the town of Preah Rumkel and all its inhabitants – only 2Km downstream from the dam! That none of the governments concerned has bothered to take such an important issue into consideration is unbelievable.

We informed the Preah Rumkel community of such a possible scenario so they can seek intervention by the Cambodian government.

We concluded our Meeting with a Blessing Ceremony and Meditation by the local Buddhist Monks. 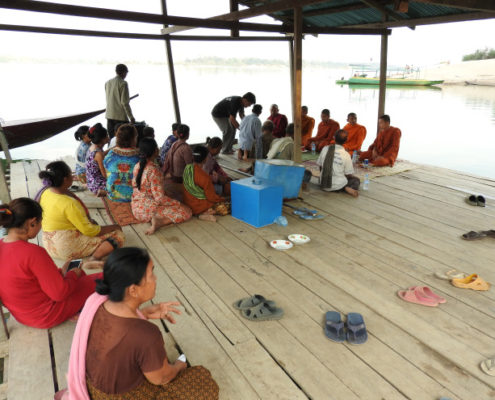 Buddhist Ceremony Preparation at Preah Rumkel, Cambodia – Asking for protection for: the people, the Mekong River, the Fisheries & Dolphins.

Intervention by the Cambodian government is urgently needed to address both issues:

1) The safety of its people in case of a Dam breakage – halting the Don Sahong Dam construction is highly recommended for social, ecological and economic reasons;

Comments On: Draft – Study on the Impacts of Mainstream Hydropower Dams...