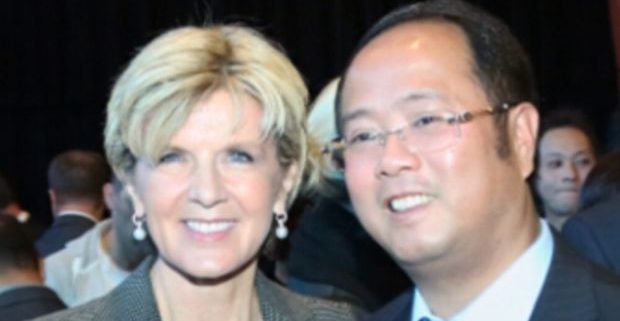 by Dr. Lilliana Corredor
Founder, Scientists for the Mekong. March 29, 2017

Facts: DFAT provides Funds & Encourages Hydropower Dam Development in the Mekong River Basin, specifically in Laos, as per document below.

Q1: Is it ethical and the best use of Australian money to provide funding for Hydropower Dams in major tributaries of the Mekong River in Laos, and work in tandem with the main Chinese Hydropower Dam Developer “Sinohydro” – while there’s mounting scientific evidence of:

Q2: Shouldn’t DFAT support Vietnam and the 20 million people that live on the Mekong Delta by calling for a STOP to Dam construction in the LMB? That is, should Australia reject the economic hardship caused by the potential collapse of the Mekong River Delta – through the loss of land and properties by salt intrusion and rising sea levels – leading to a massive Humanitarian Crisis with the displacement of 7-14 Million people? Thus, an “Environmental Refugee Exodus” of an unprecedented scale?

Q3: Shouldn’t an important Department such as DFAT adhere to the truth and facts when publishing Foreign Policy in its website?

In this webpage, DFAT claims:

“Australia’s Mekong Water Resources Program will continue to help develop and better manage the region’s water resources for greater economic opportunities as well as to protect the 60 million people that rely directly on the Mekong River for their livelihoods. Hydropower development is vital for the economic future of countries of the Mekong Basin, and its transparent management is critical to the stability of countries and regional links. Through targeted investments in quality planning, our program is helping countries of the region build hydropower dams sustainably.”

DFAT’s above statements are FALSE and MISLEADING, as explained below:

1. Australia is NOT “helping the better management of water resources in the Mekong basin”. Well on the contrary, DFAT  is helping RUIN the Water Resources by promoting and funding Dams! See impacts below.

3. Claiming to “protect the 60 Million people that rely directly on the Mekong River for their livelihoods” is scandalous and dishonest. Instead, DFAT is doing exactly the opposite: you are jeopardizing the vital Food Security, Water supply and productive riparian areas on which 60 Million people depend!

4. Hydropower is NOT VITAL for the future of LMB countries! Other sources of energy can be used, including Solar, Wind, Bio-Fuel & even Micro-hydro.

5. Transparent management of Hydropower in the region? Really? For over a decade now DFAT’s Trade partner China, has been promoting repression in the region, resulting in lack of transparency and information blackout. Furthermore, Chinese Developers, Thai Developers and Malaysian Developers have not fulfilled their contractual duties to the displaced communities: the compensation packages are dismal, training has not eventuated, resettlement land offered is non-arable so people cannot even grow their food!

Moreover, Developers have not undertaken Free Prior Informed Consent nor Community consultation of any kind until AFTER starting the construction of the Dams. Also, by not allowing information or even visits to the Dam sites not even by journalists. Where is the transparency in the above? Exactly how is DFAT helping achieve transparency?

6. Planning hasn’t worked out in Laos as per your own report (above), because the Laotians don’t care and don’t follow up.

7. There is no such thing as “building Hydropower Dams sustainably“… This statement is OUTRAGEOUS!
Dams preclude Sustainability, as per its definition:

“Sustainability (from sustain and ability) is the property of biological systems to REMAIN DIVERSE and PRODUCTIVE INDEFINITELY. Long-lived and healthy rivers, wetlands and forests are examples of sustainable biological systems.”

Hydropower Dams in the Mekong River Basin are already fragmenting the river; reducing Biodiversity, Productivity and Fisheries; creating droughts; damaging Wetlands and Floodplains; and sinking the Delta, to mention a few!
How is this sustainable?

See more information and articles that support our statements below.

1) Hydropower Dams Environmental impacts: BLOCK Fish Migrations, Sediments, Nutrients, Change the Hydrology, Change the Geo-morphology of the rivers, and reduce Water supply downstream and constantly change the water levels disrupting the stability of the ecosystems. Given that the key to productivity of the Mekong is FLOODING and the sediments and nutrients carried by the waters and spread out throughout the floodplains and tributaries, the reduced floods are having serious deleterious effects (and dozens of planned dams are not yet built). That is, decreased productivity, depleted fisheries and reduced biodiversity in the Mekong River and tributaries. Effectively, Hydropower is putting at RISK the Food Security & Water Supply of 60 Million people! Hence, Oz is helping create a Humanitarian Crisis like never before seen!

Please don’t tell us that the Dam engineering has been fixed to allow fish and sediment passage. Below we provide studies that show they do not work! Besides,not all sediments accumulate at the Dam wall. The majority of sediments are spread in the bottom of the huge reservoirs, so will not be going down the Dam improvements any time soon! See supporting studies below.

2) Hydropower Dams have INCREASED POVERTY in Laos and Cambodia among displaced communities instead of benefiting them.

Please do NOT use the excuse of “Reducing Poverty & increasing Quality of Life”. There are several studies in Laos and Cambodia that PROVE that POVERTY HAS INCREASED with different Dams, with Women and children suffering the most! See supporting studies below.

3) Hydropower Dams are constant sources of Green House Gases – i.e. Methane, CO2, Nitrous Oxide. Hydropower is NOT Green & Clean Energy, as advertised by China and Australia to justify the construction of more Dams.

Far from it. In fact, one large Dam produces more GHG than a coal plant! These GHG trigger more Climate warming, resulting in rising sea levels. This in turn, infiltrate the Delta and ruin very productive land, displaces millions of people and ruins the economy of Vietnam… See supporting studies below.

4) Hydropower Dams are posing a serious threat to the viability of the Mekong Delta, the most productive area of the River, the Granary of SE Asia, home to 20 Million people.

Studies’ results indicate that hydropower development dominates the changes in floodplain sediment dynamics of the Mekong Delta, while sea level rise has the smallest effect. The Delta is already sinking, lost nearly 1 Million hectares to seawater intrusion in 2016. If it SINKS by 1meter, 7-14 MILLION people will be displaced & become “Environmental Refugees” – homeless, jobless, hungry. A man-made, partly Australian funded and promoted, Humanitarian crisis without precedent is taking place now and will get worse if any more Dams are built! See supporting studies below.

5) Hydropower Dams in Laos & Cambodia are being built on Human Rights Violations and Repression. Where communities displaced by Dams have NO voice, nor real consultation- despite false claims by the governments. They are forcefully evicted and resettled against their will. Resettlement villages offer non-arable barren land, are over 25Km from the River they know, and often, have no electricity. People can’t grow food, can’t fish and have no money to buy food… How are they to survive? China says they will have to change from a “subsistence living” and adopt a “Market life style”. Promised training has not been consistent nor does it include all displaced people, leaving most hungry. See supporting studies below.

6) Hydropower Development in the Mekong Basin is focused on “Trade Agreements”, which supersede the needs of the people and the environment. The Chinese Government has State Owned Enterprises (SOEs) such as the biggest Hydropower dam Developer in the World “Sinohydro”, and others. Chinese companies unashamedly and openly offer “donations” of great amounts of money to Political Parties, Rich influential individuals (the Elite), Companies and Government Officials to push their projects.

A well known case is Cambodian Tycoon, Kith Meng, Chairman of The Royal Group in partnership with a Chinese Corporate Group: together they are building with Chinese Developer “Hydrolancang”, the Lower Sesan 2 Dam in a major tributary of the Mekong. This partnership is awaiting authorization by the Cambodian Government to go ahead with the 3 most damaging Dams for the Mekong River:
the Sekong Dam, Stung Treng Dam and Sambor Dam.

Another case is Australian Foreign Affairs & Trade Minister Julie Bishop​ (DFAT) who received $500,00 dollars in “Donations” from Chinese Businessmen over the past 2 years for ‘undisclosed’ deals. This:

Australian DFAT must STOP any involvement in Hydropower Development in SE Asia to avoid being partly responsible for economic and irreversible environmental damages to the Lower Mekong River Basin, resulting in a massive Humanitarian Crisis.

DFAT wouldn’t be representing or abiding by the “compassionate principles that characterize the Australian people” if it persists in condoning and funding an environmental, economic and social disaster!

Mrs. Bishop emphasized “it is very important for the Government to get the views of Australians”. Yet, the “Community Consultation” lasted 30 minutes!   So much for Democracy!

Julie Bishop insisted that Australia’s Foreign Policy is totally aimed at “Reducing Poverty”, “Enhancing the lives of our neighbours”, “Helping Create Economic Growth and Prosperity for all”... Not quite the on-ground reality.

This Submission was not mentioned. Bishop did not reply to controversial questions, and the short  time allocated ensured there was no time!

We hope that by sending this Submission as a “Paper Document” addressed to her office, she may consider replying to our questions.

5) Hydropower Dams in Laos & Cambodia are being built on Human Rights Violations and Repression.

6) Hydropower Development in the Mekong Basin is focused on Trade Agreements that supersede the needs of the People, the Best Management of the Environment and Protection of Resources.