By Dr Lilliana Corredor- on behalf of Scientists for the Mekong, 3 Feb. 2016

Edited 10 Feb 2016 – SIX villages will be drowned by the reservoir for the Lower Sesan 2 Dam, instead of FOUR as previously reported.

The controversial Lower Sesan 2 MEGA-Dam (LS2 Dam) is being built in the worst possible location: at the junction of two of the most important tributaries of the Lower Mekong River in northern Cambodia, i.e. the Sesan River & Srepok River.

This dam has received strong opposition and criticism from scientists, fisheries experts, NGOs and Human Rights groups. The LS2 dam will be located at a vital junction for the reproductive migration of dozens of Mekong River fish species. Hence, blocking this passage to two main rivers will alter significantly the reproduction of these species, biodiversity and fisheries of the area; and, will also have a major impact on the Mekong River itself as vital nutrient rich sediments are blocked by this massive dam.

More importantly, thousands of families in SIX Villages in northern Cambodia will be displaced. A village located immediately downstream from the Lower Sesan 2 Dam has already been relocated. The remaining FIVE villages will be ‘drowned’ and the communities will be relocated to give way to the reservoir of the (LS2 Dam) in 2017.

The villages to be drowned by the massive dam’s Reservoir are: 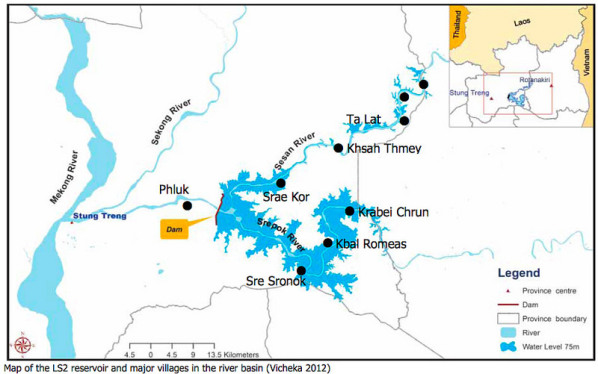 Over 500 families living in the Mekong towns of Srae Kor 1 & 2 -on the Sesan River, have strongly rejected this dam project from the time they were informed it would go ahead.

During a Community Meeting held on the 3 February 2016, the Srae Kor Community asked the assistance of Scientists for the Mekong to publicise their case and their petition for fair Compensation for the loss of their homes, agricultural lands, harvests & livestock – as a result of their property being “drowned” by the reservoir for the Lower Sesan 2 Dam. 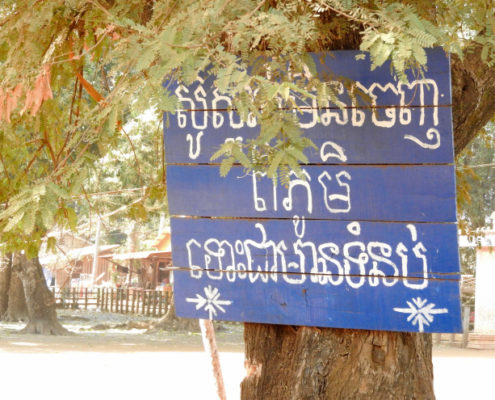 Sign at the entrance to the town of Srae Kor 1: “We’ll rather die than leave the village, even if the dam is built.” Photo credit © Shanti Cantrelle. 3 Feb. 2016

Below are the main points highlighted by the 60 members of the Srae Kor 1 Community who attended the Meeting: 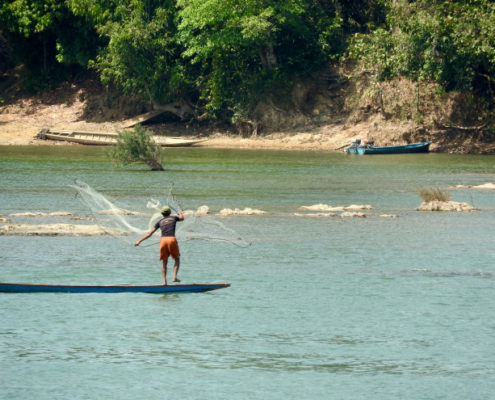 Fisherman in Lower Sesan River, in front of Srae Kor village. We observed this man for half an hour and during that time he did not catch a single fish. Photo credit © Shanti Cantrelle. 3 Feb. 2016

“Whilst before we could drink the Sesan River water, we now have to boil the water. Children, however, play in the river and drink river water, reason why they are mostly sick, with severe vomiting & diarrhoea.”

(N.B. These two important issues are a common occurrence in all towns affected by dams, according to villagers we have interviewed. Yet people are not being compensated for these losses.) 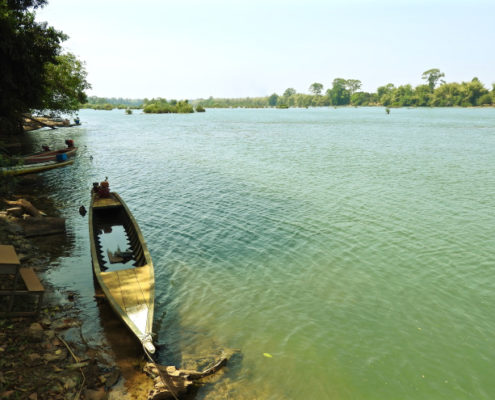 Lower Sesan River, at Srae Kor, Cambodia. This area will be submerged for the reservoir of the Lower Sean 2 Dam. Photo credit ©Shanti Cantrelle. 3 Feb. 2016 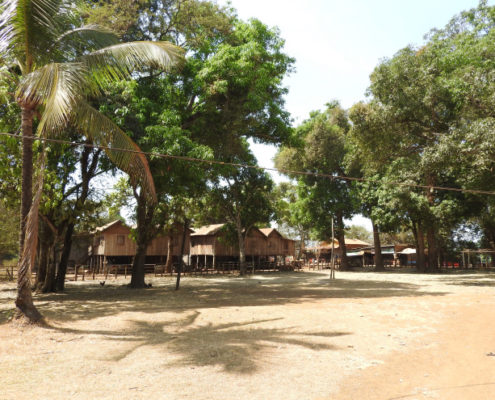 See short video of family stating they will not relocate (in Khmer, with English comments): https://youtu.be/Ygkp7xlAiv8

Below are photos of the Relocation scheme for the villages of Sre Sronok & Krabei Chrun in the Srepok River, in northern Cambodia. This new resettlement area is located along the route to Ratanakiri province, around 50 Km from the LS2 dam.
The remaining communities of Srae Kor Mouy, Srae Kor Pei & Kbal Romeas still need to be relocated.

Members of the community told us:

So how are we going to live – if we cannot fish and cannot grow our food?

The government says they are helping us get a better life, but they are sending us into worse poverty.

We will rather die than accept their compensation.”

It is obvious from the photos above, why the communities refuse to leave their houses and river, and why they reject the “Relocation scheme”… It is ridiculous for fishermen to be relocated to a highway, and so far from the river they know and love…

It can be clearly seen that the land surrounding the houses is too small and barren. This Compensation scheme in no way “improves the lives nor the standard of living of the displaced communities” as falsely advertised !

See short video of Community Meeting in Srae Kor clearly stating they will not relocate as the compensation scheme is so bad (in Khmer, with English comments):
https://youtu.be/9ymiYM7BLpA

Locals demand the Cambodian Government and the Lower Sesan 2 Dam Developer compensate them fairly or else they refuse to leave.
In their petition the Srae Kor Community stipulate clearly the compensation points sought. 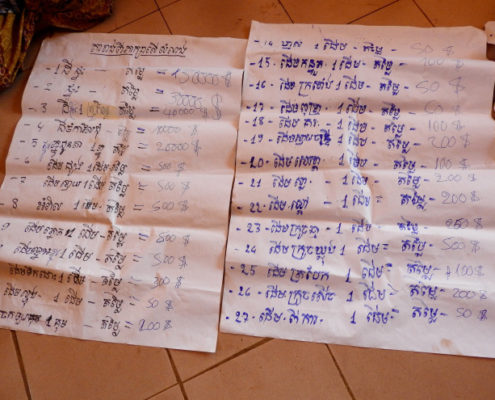 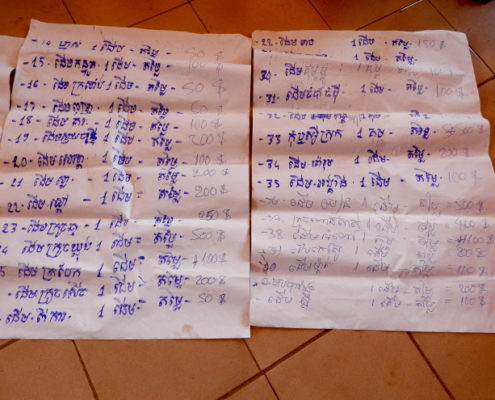 The Petition lists above were sent to the developer and authorities but the villagers have received no reply. These lists include compensation for: USD $30,000 per house, costs of different trees, etc.

We stressed the importance for communities affected by the Hydropower Dams to hold both the Developer and the Government accountable.

We advised the Community to seek legal aid via LICADHO – an NGO that will help them get free lawyers to represent them in court. We suggested the villagers ask their lawyers to seek an injunction against the Developer, if necessary to stop construction of the Dam until such a time as the Developer signs legal documents agreeing to fair compensation in consultation with the affected communities.

We also suggested they seek assistance of ADHOC or EIR – NGOs that address the issues of Human Rights abuses, such as in this case. It is unacceptable to place thousands of families into further poverty without appropriate compensation. As it is, these people will be dispossessed and relocated, besides loosing their livelihoods and cultural sites. Therefore, the least companies that will be making millions of dollars at their cost and suffering can do is to pay them a fair compensation and ensure the people are not driven into deeper poverty.

We offered to publicise their story in this website, through social media and through our future Submission to all Lower Mekong Countries regarding the Impacts of Hydropower Dams on the Lower Mekong River.

Some families, however, refuse to leave no matter the compensation…

A middle-aged lady told me with tears in her eyes:

“I will rather drown in my house. I will not leave, no matter what they offer me.”

P.S. These notes were taken during our Mekong Reconnaissance Journey, assessing the impacts of Hydropower Dams on the Mekong River, its communities, fisheries, water quality and dolphins in February 2016.